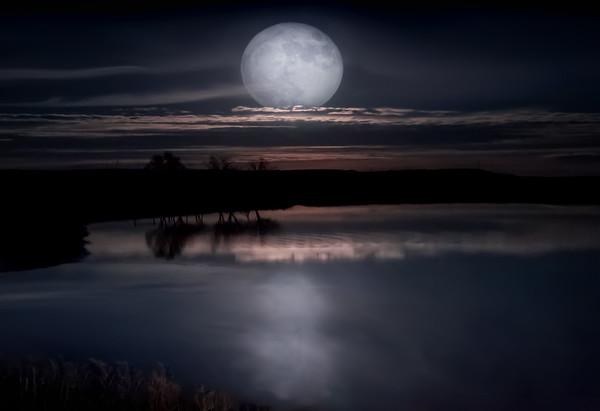 This scene was taken in November 2016.  It was the super moon for that year and since it rose early, I knew I had to get out and capture it.  I headed south of Cheyenne as I wanted to shoot it rising over the rock formations just south of the Wyoming border.  Unfortunately it was a bit cloudy and when it first rose, there wasn't much to see.  I snapped a few different shots but they were a bit underwhelming so I packed up all of my gear and headed out to find other compositions.  As we crossed the CO/WY border, heading back to Cheyenne, I spied a pond off to the east that was reflecting the moon in all it's big bright glory.  It was getting above the clouds now and I didn't linger in setting up the shot as I wanted to incorporate  the clouds.  I chose 2 lenses as I wanted to do a perspective blend in post to fulfill the artistic bent I had for the scene. I shot the moon with a 100-400 L IS II USM, the pond with a 16-35 L IS III and composited them together in Photoshop using layers, masks and luminosity selections.   With all that technology though, I think the neatest aspect of this scene was created by throwing a rock in the water to give the reflection a dispersed velvety feel.

I have shot many moons since this one, but I believe this will be my favorite for a very long time.  :)